To say that we are in love with our new baby vines might be an understatement.  This spring, as we planted our Estate Vineyard, the staff at Fidelitas anxiously awaited any new information and pictures coming from Charlie and the Vineyard crew.  The road was marked?  End posts delivered?  IRRIGATION? What’s getting planted today?  Are they greenhouse plants?  Dormant rootings?  Who knew we could be so excited.

When planning our Staff Retreat this year, visiting Inland Desert Nursery was perhaps the most requested activity.  Team Fidelitas wanted to see where it all begins.  We wanted to see the grafting and dormant vines, and tiny, tiny plants.  To us, this was thrilling, so we were pretty excited when Ryan welcomed us in (I think we may have been the first group who actually wanted a tour).  Inland Desert is a family owned and run operation dedicated to propagating and distributing clean vines (we’ll come back to that later) across North America.  Based between Benton City and Prosser, they do much more than just Washington vineyards and send plants to more than 30 states.

At the risk of going on and on about baby vines, I’ll try to summarize what I learned that day:

Inland Desert works with the Clean Plant Center to ensure that all vines are CLEAN.  This means that the vines they are working with have been certified as free from targeted viruses.  Since wine grapes are propagated via cuttings, it is so, so important to make sure that they are virus free, otherwise these viruses can spread quickly, affecting entire vineyards.

They sell more grape varieties and clones than I knew existed.  I’ve gone through my Sommelier training, plus some other wine coursework, and read a million wine books, and they have grapes I’ve never heard of before (Kay Gray?).  If they don’t have it, they’ll find it for you.  The catalog these guys carry around looks like a phone book.  Remember, a grape varietal (eg. Cabernet Sauvignon) can have many, many clones.  We have 3 Cabernet Clones planted in the original 2009 planting and 5 in the 2015 planting.  Clones are genetically identical but offer different characteristics, like earlier ripening, looser grape clusters, more tannins.  Think of it like identical twins but one is taller and can run a little faster. 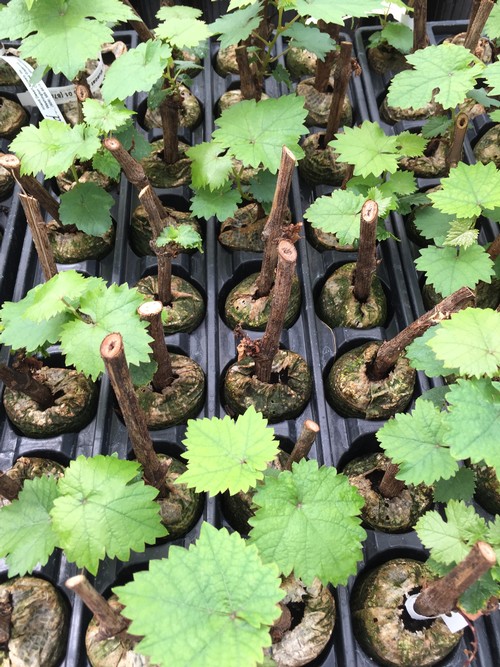 cuttings from the mother plant

The talented staff has many ways of giving us little vines.  As you know, there has been A LOT of planting on Red Mountain this year, which meant that we got to plant dormant rootings and green potted plants.  In Washington, we have a low presence of phylloxera (a tiny little louse that likes to nibble on the roots and nearly wiped out France in the late 19th century), mostly due to our sandy soils, which these critters don’t like, so we can plant vines on their own rootstock.  However, areas like Oregon and California battle it a bit more so they need to have vines grafted on to a rootstock that is phylloxera resistant.  Here is the coolest part: to grow a new plant, they get a stick of an old plant (a mother plant) and stick it in the dirt.  That stick starts growing and once it has two buds, they clip it, put that new stick into dirt, and it starts growing.  That mother plant just keeps going and going and going (as good mamas do) and pretty soon you have a greenhouse full of little vines. 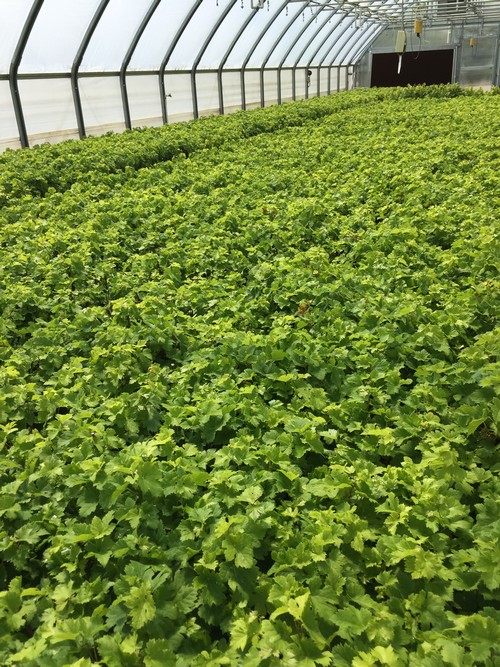 There is so much more to learn about this whole process.  If you are at all interested, I’d highly recommend checking out the Inland Desert Nursery website (and searching for the amazing Charlie picture while you’re there).