It’s January, which means that although it’s still freezing out there we’re starting to grow tired of winter stews and heavy holiday food. I've been trying to incorporate some fresh dinners at my house as of the start of this new year, and this Cajun seasoned Tuna (and a glass of the new release of 2012 Northridge Vineyard Malbec) is sure to kick up the spice and keep you warm.

You can buy Cajun Seasoning in the spice isle of any grocery store, however, it’s EASY to make yourself with spices you already have in your cabinet. I mixed mine and stored it in a small mason jar. 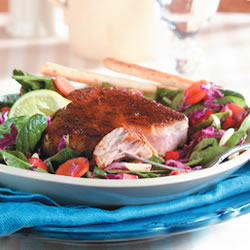 Living in Seattle, it’s generally pretty easy to pick up fresh tuna steaks at a nearby PCC or Whole Foods but after a little research I have found that most stores will carry frozen tuna steaks at the Seafood counter if you cannot find fresh. For our friends in the Tri-Cities, I found out that if you call ahead to Yokes a day or so in advance they can usually order in fresh tuna steaks for you (awesome!) or they will always have a stock of frozen you can pick up.

Here’s the recipe for quick, easy, and healthy Blackened Tuna Steaks which are perfectly paired wild rice, an arugula salad, and a glass of our new release 2012 Northridge Malbec. Cheers!

Now that the holidays have come to an end it is time to cheer on our favorite sports teams. Fidelitas decided what better way to show our support for the Seattle Seahawks than representing our Hawks pride at both of our tasting room locations this past weekend. One of the best parts of being a Seahawk fan is that we are everywhere, and you are part of a community. Like many, we will be cheering on our team this upcoming weekend and are hoping for the best, another trip to the Super Bowl. 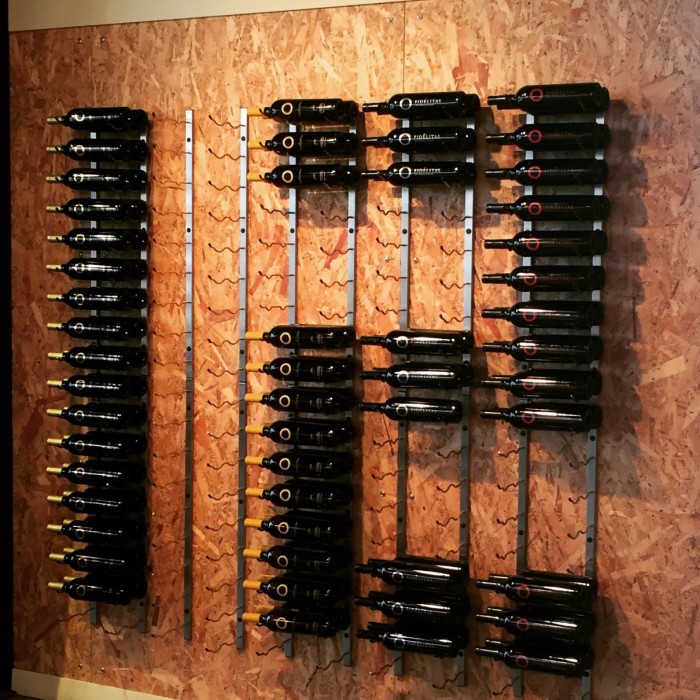 Similar to Charlie’s motto, “It’s just wine” remember, “It’s just a game.” Whether you are a 12 or not, just appreciate what makes sports great and enjoy watching some good old fashioned football. 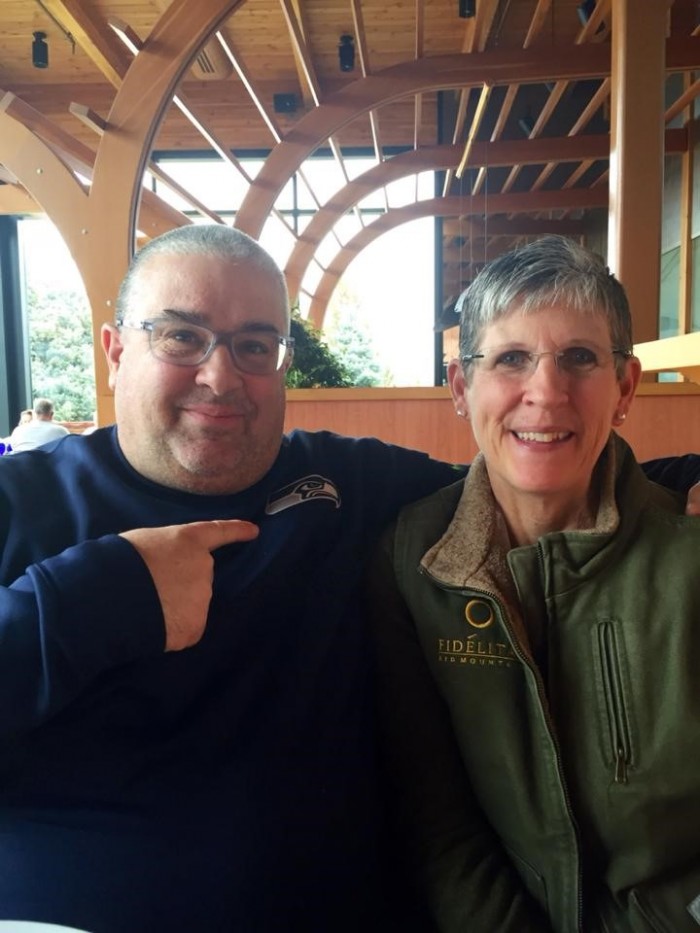 Team Fidelitas will be enjoying the game this Sunday with a glass of one of our favorites. GO HAWKS!!! 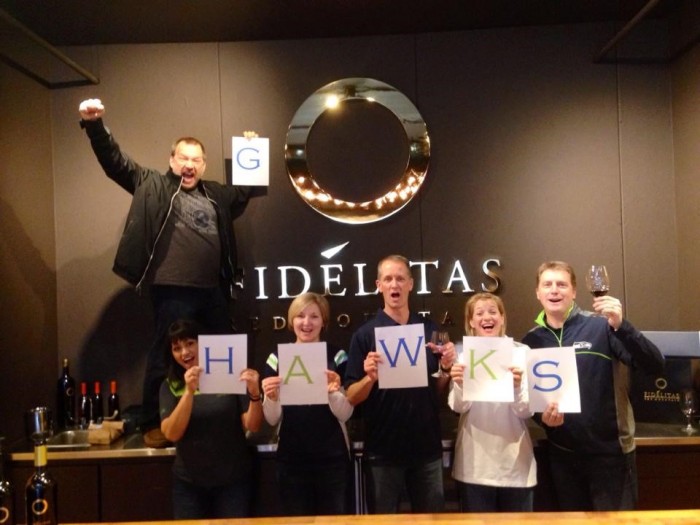 Just when you think you have seen all that Mother Nature would send our way, with 2013 being the warmest vintage on record, 2014 topped it.  Our home, Red Mountain, had a record 3599 Growing Degree Days.  Growing Degree Days are a measure of the amount of heat/sunshine, one gets over the course of a growing season.  This warm vintage led to almost perfect growing conditions for ripening fruit throughout the state.  Red Mountain was no exception with harvest starting right after Labor Day and continued until the first week in October.

If I remember correctly a year ago in this letter I was talking about 2013 being one of the warmest vintages on record, especially early on in the year.  Those 2013 wines are shaping up quite nicely in barrel and we look forward to bottling those wines soon for release in the future.  I would not hesitate to say that some of the best wine we have made to date, are still in barrel.  Both 2013 and 2014 should be great ones for us in the future.

Our current releases are still focused around the 2010 and 2011 vintage.  I’ve had the time to see how these wines have developed, and could not be happier with both for drinkability now and future ability to cellar these red wines.  2013 is our first vintage for white wines from Red Mountain.  We made Semillon and Optu White, which is blend of Sauvignon Blanc and Semillon.  We have been pleasantly surprised at the great quality from Klipsun Vineyard for our Red Mountain white wines.

Starting with our first release of the year in January, we will begin rolling out many of the new vintage 2012 red wines. We have done some initial sneak peeks at these wines and the response has been very positive from both critics and consumers.

A very big milestone to look forward to from us for the coming year is the release of our first Fidelitas Estate Vineyard Cabernet Sauvignon.  This wine has been many years in the making, going back to our purchase of the land in 2007, and now finally getting to the point where we have a wine bottled and ready for release.  We currently have a little less than three acres of three different clones of Cabernet Sauvignon planted in our Estate Vineyard.  The wine we bottled was a selection of the very best barrels and clones.  The quantity of this inaugural wine is very limited, so do not hesitate to purchase once it is released.

We are very excited about the release of another new wine from Red Mountain: the 2012 Quintessence Vineyard Cabernet Sauvignon.  This vineyard site, just east of Col Solare, shows much promise and we look forward to the wines from this vineyard.

We are also expanding the number of Red Mountain focused wines with addition of Merlot, Petit Verdot, and a Red Wine from Ciel Du Cheval Vineyard.  These wines will join our current offerings of Cabernet Franc and Cabernet Sauvignon from this famous Red Mountain vineyard.

If you have been to our home on Red Mountain, you may have noticed the great amount of land being developed through the appellation.  These new vineyard developments are a result of the new irrigation district formed on Red Mountain in conjunction with the Kennewick Irrigation District and the availability of water.  This is a project many years in the making and will literally change the face of viticulture on Red Mountain.  We will be part of this new viticultural development as we plan on planting nine acres ourselves in the spring of 2015.  Many other acres will also go into production within the appellation.  Currently there are about 1500 acres planted in the appellation.  Within a couple of years the AVA will see around 3000 acres planted in total.  Needless to say, we are in for some major changes on the mountain.

Thank you, to all of our loyal customers who have been supporters of Fidelitas throughout the years of our existence.  I can honestly say that I think our best wines are yet to come.

This NYE we invited our neighbors (who happen to double as our best friends) over to our place for a night in avoiding the craziness that is New Years in Seattle.

Most of the evening we were sipping the 2011 Champoux Vineyard Merlot. This could be because we are all so happy Charlie finally released a Merlot again this winter after the long time gone Red Heaven Vineyard Merlot that sold out in the spring. It could also be that I gave everyone a bottle of the Champoux Merlot for Christmas because it's velvety, bold, beautiful...and currently my favorite wine in the line up. 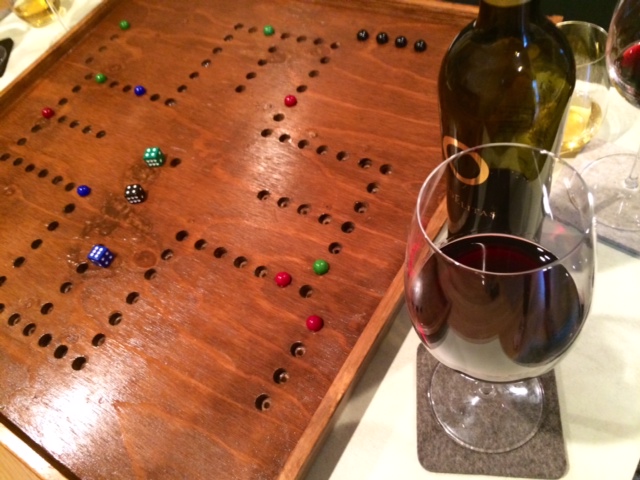 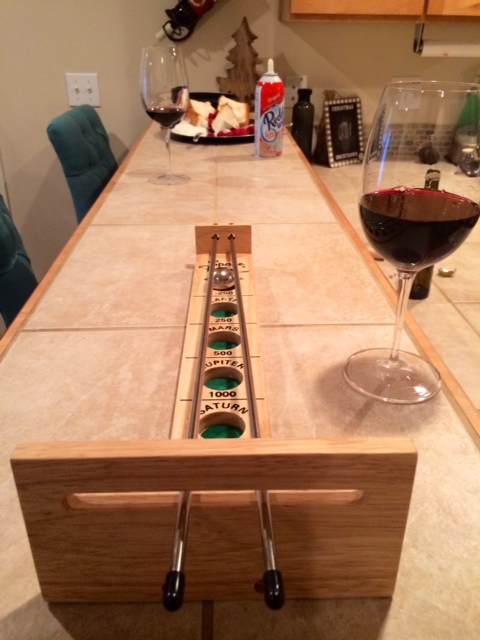 The Champoux Merlot happens to be seen in both of these pictures of our favorite games of the evening. Wahoo (a marble game similar to Parcheesi), which we pull out and play almost monthly. Logan, our neighbor actually gifted a hand carved Wahoo board this year to his family for Christmas... seriously impressive carving skills he has.

We also brought out an old family favorite that some of you may recognize as Space Force or Shoot the Moon. Possibly the most fun was had with this one. Note: the more wine you drink the more hilarious the game.

We tried our hand at making an Angel Food Cake from scratch and it actually turned out to be DELICIOUS! Can you read my surprise here? I am by no means a baker. Tossed some raspberries on the side, drizzled with agave which literally made it sparkle, then piled on the whip cream. We served this with chilled glasses of our Klipsun Vineyard Late Harvest Semillon. I meant to drizzle the Late Harvest Semillon over the top of the cake however, by the time I remembered the cake was long gone. 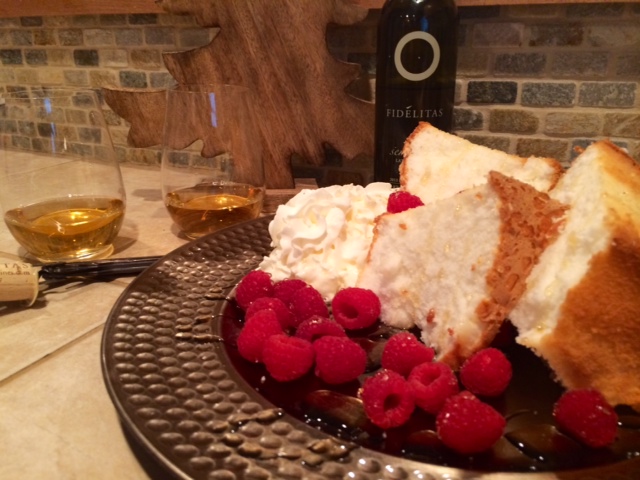 Needless to say, we had a great night and were all happily tucked into our beds by 12:15. Cheers to our Fidelitas filled New Years!