Here on Red Mountain, we have had snow on the ground since the Super Bowl. It’s packed around the chairs on the patio and covers the entire Fidelitas Estate Vineyard.  Here are a few, quick facts, about the snow and potential impact that we can expect on Red Mountain. 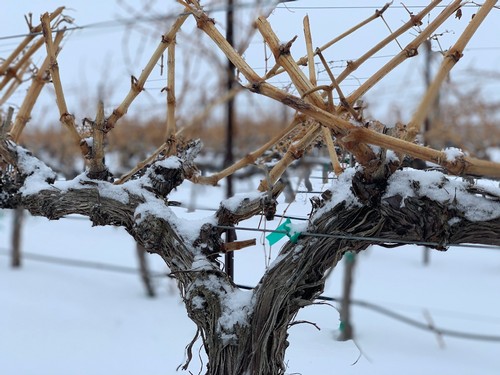 With grape vines, we look at potential damage to the buds, as well as the phloem (bark) and Xylem (wood). We are lucky to have WSU’s Viticulture and Enology program providing us with real time cold hardiness monitoring. So far, they are showing that the outside temperatures are tracking well above what we’d consider critical temperatures that could lead to damage in the vines. 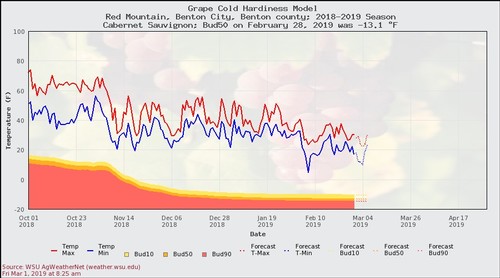 You’ll notice on these graphs that the temperatures and critical temps tend to track closely together. We were fortunate this year to have a slow decline in temperatures that allowed the vines to acclimate to the outside temperatures. A quick cold snap could have had a different result.

In addition to the cold temps, we saw a lot of snow, which is a good thing. A lot of people think snow = cold = bad. But, the snow is an insulator that allows the ground to freeze only to a depth of around 6 inches sparing the vine from root damage.  Without the snow cover the level that the soil could freeze would be deeper, with greater potential for damage. Think about what our front yards look like now. The grass is dead, but we know the healthy new green grass is below the earth, waiting to come up soon. 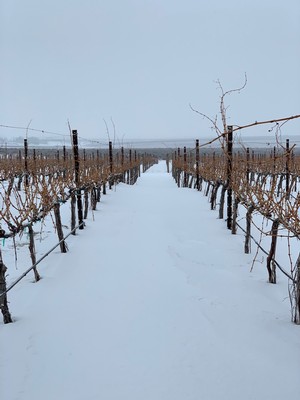 If we have a concern right now, it is the long-term impact that this will have on the season. Bud break could be 2-3 weeks later than usual, which could drastically impact the growing season. This is a time where we feel lucky to be on hot Red Mountain, where we’ll still expect the fruit to get fully ripe. Cooler regions such as Walla Walla the certain sites in the Yakima Valley may experience some ripening troubles. On the flip side, extreme heat could potentially get the sugars to the proper levels, but the grapes won’t be physiologically balanced.

I suppose it’s the farmer in all of us who worry about the worst possible scenario. We all like to talk about the weather but so much can happen between now and September. At this point in time, we’ll just hope for the temperatures to slowly warm. A slow melting of snow will allow the moisture to go directly into the soil as opposed to a quick thawing where the soil not able to absorb the water quick enough resulting in water running off quickly causing possible flooding. This is one of the joys of farming and winemaking…every vintage presents a new challenge and we get to still work with Mother Nature to create wonderful wines.