All In on Red Mountain 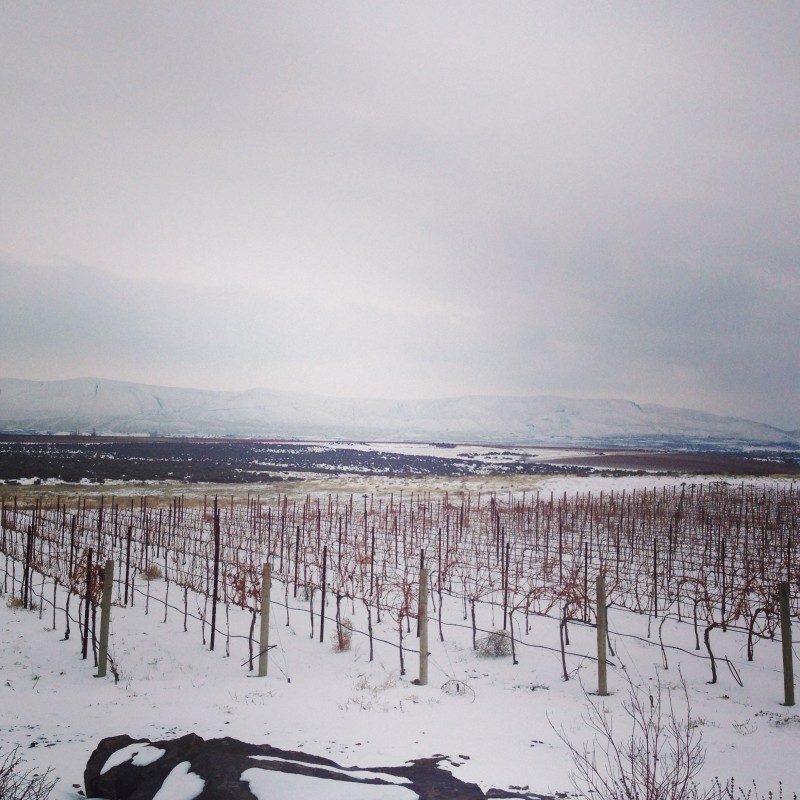 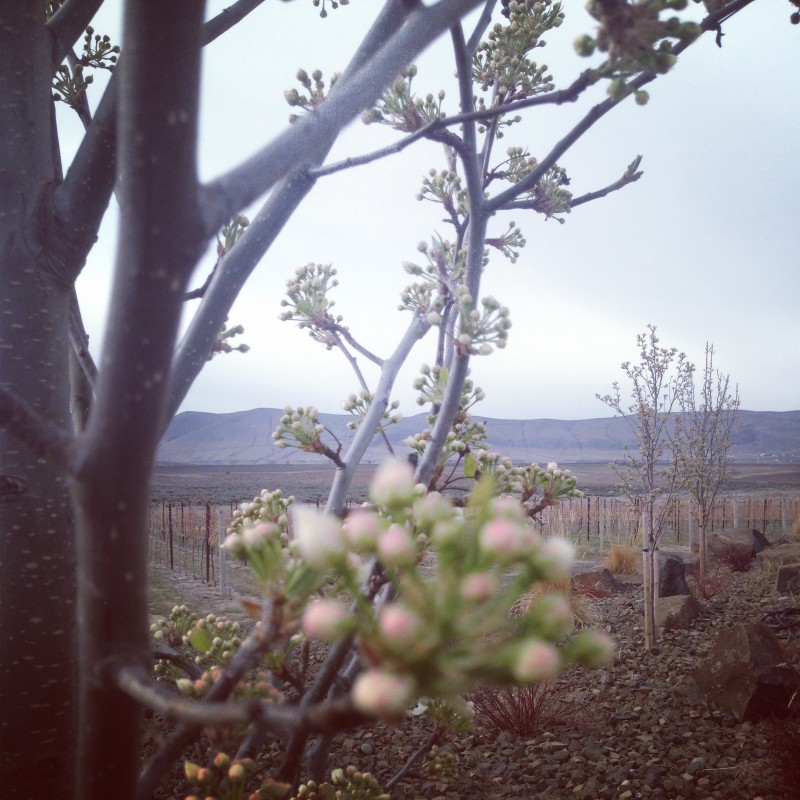 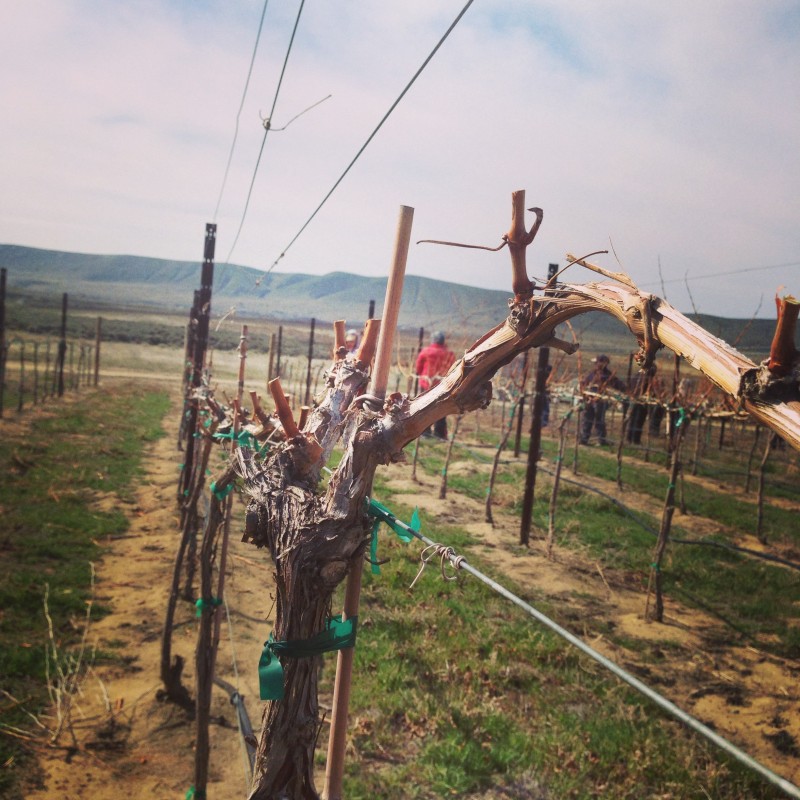 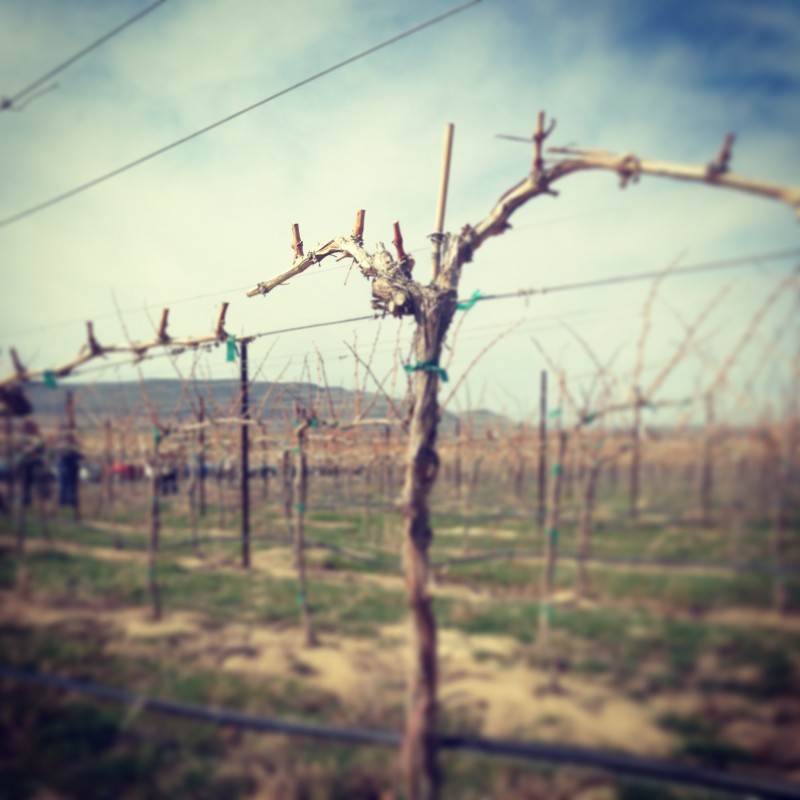 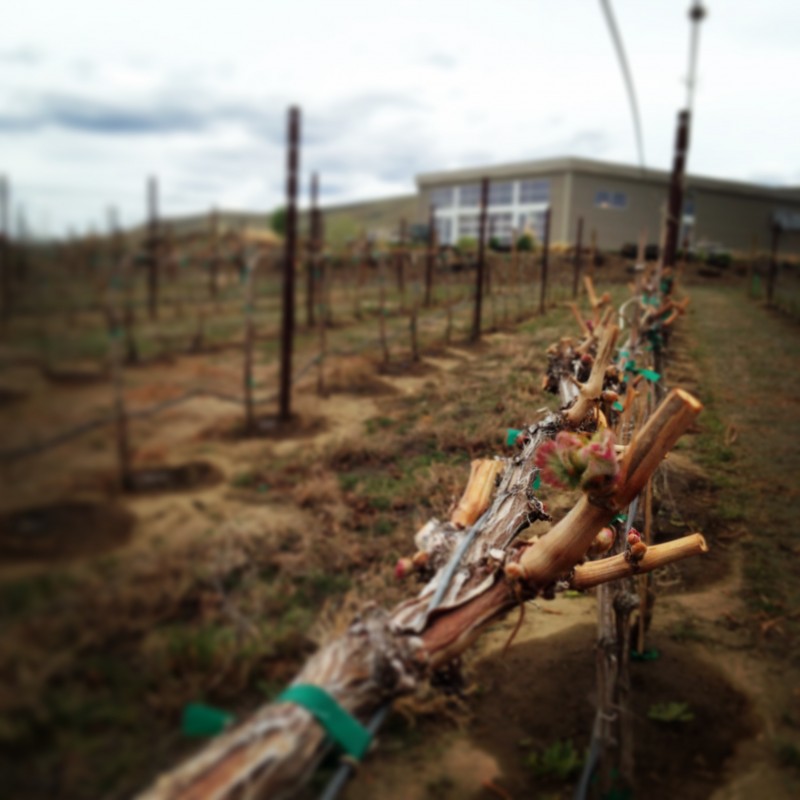 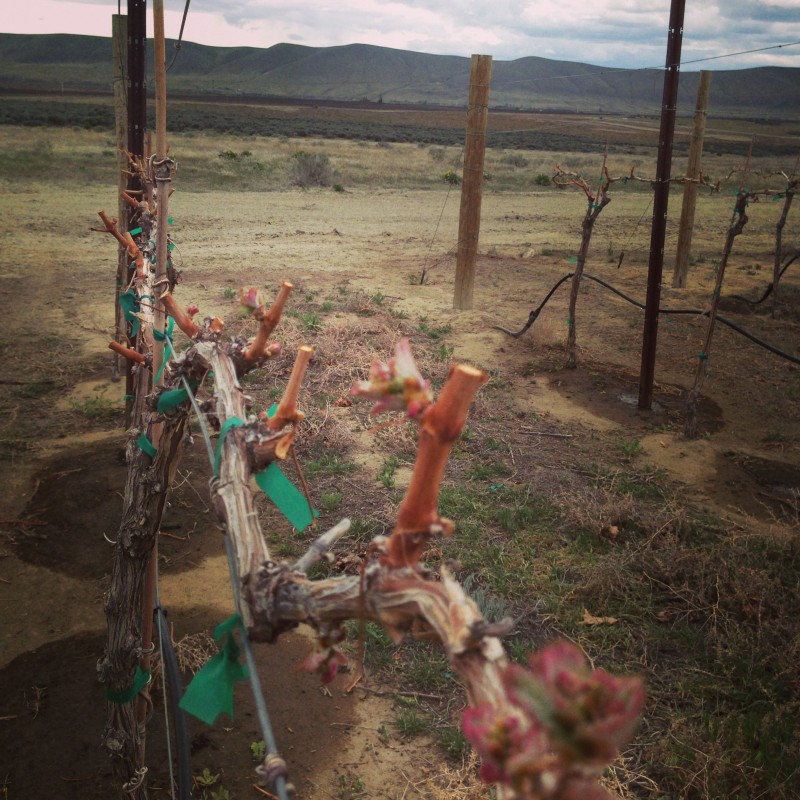 We are getting spring fever here in Woodinville so our lovely Erin on Red Mountain sent some pictures of the estate vineyard to remind us that although the vines are bare, spring is not far off and there are blue skies ahead on our beloved mountain! Upon receiving these photos I thought to myself “what exactly do those vines do in the winter anyway?” I gave Charlie a call and his response: “they’re sleeping.” Simple enough. He then went on to explain that technically speaking in winter, grape vines are dormant, meaning “having normal physical functions suspended or slowed down for a period of time,” and I’ll admit I got a little envious of those grape vines in their deep slumber. He expects pruning to start within a few weeks which means nap time is almost over for these guys! 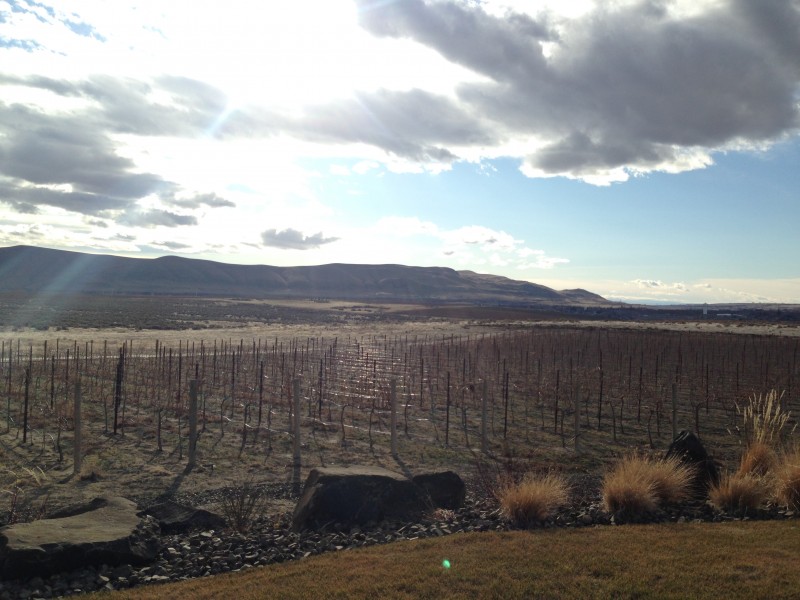 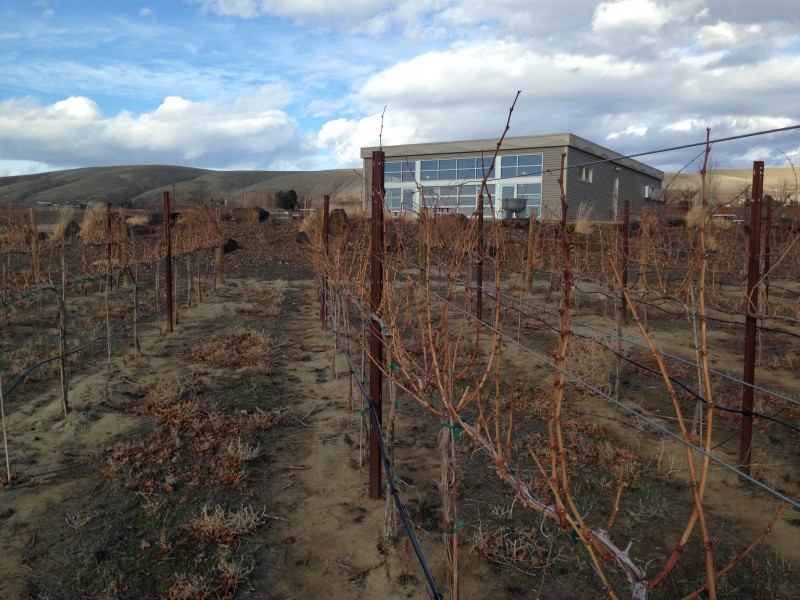 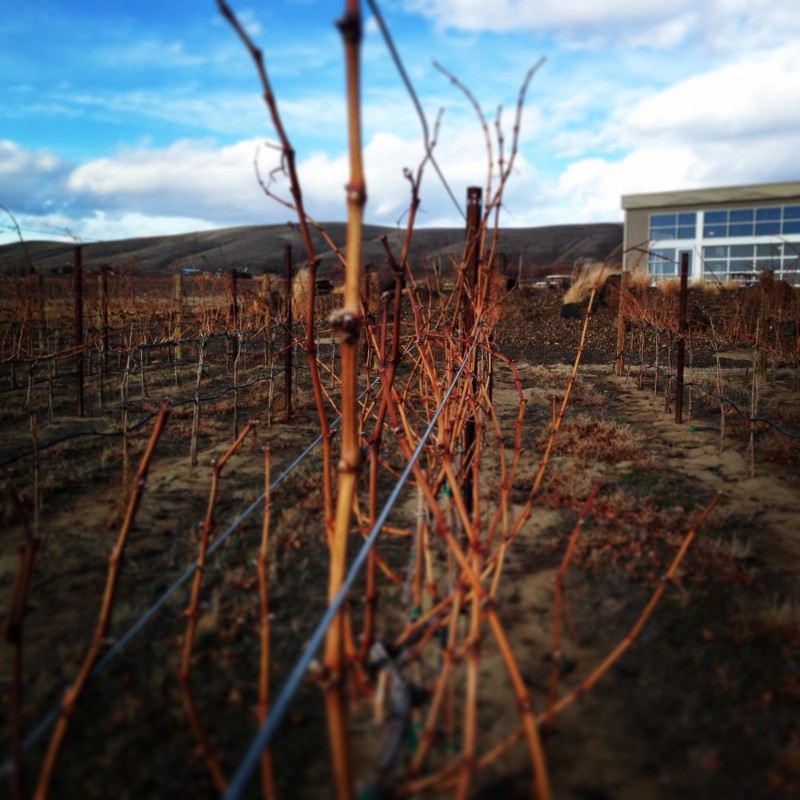 A Year in Review and Looking Forward

2013 was my 26th vintage in Washington and with each vintage comes new surprises and challenges.  I think that is what makes winemaking so intriguing to me in that each year “Mother Nature,” gives us challenges to deal with in the vineyard and we try best as we may to make the very best possible wine.

2013 happened to be one of the warmest vintages on record.  Historical weather data show it to be one of the warmest heat accumulation years on record, especially early accumulation of heat.  As a result we started harvesting grapes for the vintage before Labor Day, which in 2013 fell on September 2nd.  For only the second time since I started making wine in Washington, we picked grapes in August to get things started.  One of the more unusual factors that influenced the vintage was how much heat was accumulated early in the vintage.  By September 1st the amount of heat accumulated over the summer was significantly higher than any vintage I had seen previously in my 26 years.  As a result, nearly everything was ready prior to October 1st.  The final heat accumulation numbers ended up being lower than 2003 in total but the way in which we got the heat was very unusual.   Many reviews of the vintage talk about early ripening and then a cooling period before other varieties got ripe.  Most of our fruit for Fidelitas with the emphasis on Red Mountain did not experience this type of ripening.

What does this mean when we look forward to the vintage.  I guess I could equate this vintage to a number of warm vintages since 2000.  Vintage 03, 05, 07 & 09 were very similar in that we would consider these warm vintages and the subsequent wines have faired quite well.  For Fidelitas, the 05, 07 & 09 ‘s have been my favorite vintages since our start in 2000.  The wines themselves show incredible intensity and concentration on the palate.  Great ripe fruit flavors, lower acids and potentially a very good to great vintage.

The current releases of the 2010 & 2011 vintage wines from Fidelitas come from two of the cooler vintages on record.  For 2011, a couple of things stand out from the vintage and how they will affect Fidelitas.  First of all, the harsh winter temperatures from the winter of 2011 caused the loss of fruit from the vintage over all. Total state tonnage dropped to 142,000 tons which was down from 160,000 tons in 2010.  So, a significantly lower total number of tons  harvested from the vintage.  The second significant thing to note from this vintage is the 2011 was the coolest vintage on record with heat accumulation totals at 2312 GDD (Growing Degree Days). A normal year is around 2628 GDD.  2013 finishing at 2860 GDD for comparison.

What does this mean in terms of Fidelitas and the wines we are producing from the vintage?  Keep in mind that a significant amount of Fidelitas production from 2011 came from the warmest AVA in Washington, Red Mountain.  Getting the crop ripe on Red Mountain was not a problem.  Getting fruit ripe from growers that we have worked with over a long period of time was not a problem at all.  We did however experience a complete loss of some varietals from the vintage.  We will miss the entire vintage of Cabernet Sauvignon from Champoux Vineyard.  Critical temperatures were such that significant bud damage resulted in no grapes being harvested at all.  We did get a very limited amount of Merlot from Champoux Vineyard, so we will continue with Merlot for the vintage.

As for the wines themselves, I am looking forward to some very nice wines from 2011.  The wines in general were harvested at lower than normal brix levels resulting in lower alcohols and more supple flavors over all.  Higher than normal natural acids will result in very age worthy wines that I look forward to trying and enjoying upon release.  The beauty of making wine in many different vintages is capitalizing on what “Mother Nature “ gives you as a winemaker.

Coming down the line, we are preparing the 2012 red blends now.  The estate vineyard at Fidelitas on Red Mountain consists of Cabernet Sauvignon of three different clones.  Each clone is planted to, around 1 acre each. Clones planted are 2, 6 & 8.  2012 was the first vintage that we were able to harvest fruit from the estate vineyard. The wines have been in barrel now for 15 months and are showing tremendous promise.  We look forward to putting blends together in the very near future and to getting the wines bottled this coming summer of 2014.

We are at great time for Fidelitas, with renewed focus on Red Mountain.  We continue to explore many new vineyard sites and varietals from those vineyards.  The future is bright with hope for making our best wines yet from emerging vineyards from Red Mountain.